When we want to know the answer to some intimate questions, we may not ask someone directly, but prefer the Internet search engine, such as using Google search. Recently frommars counted which questions about sexual health, sexual skills and relationships people searched through Google in 2020, and ranked the most searched. Here's a look at the most commonly searched for sexual knowledge in the United States. 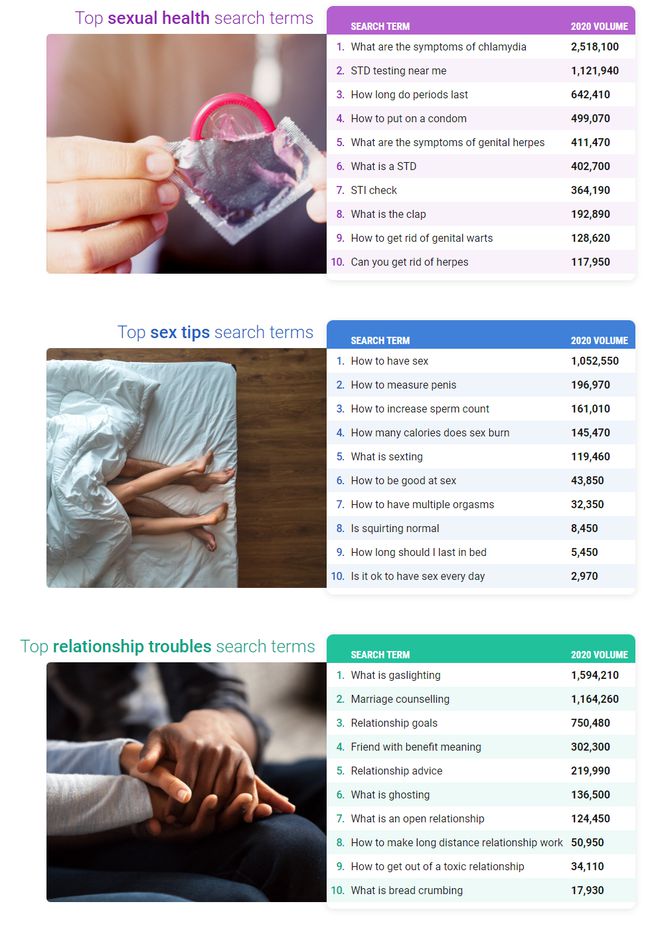 How do I have sex? It is a very straightforward question, so it is also the most searched  in the sex tips category, reaching nearly 1 million searches. Utah has the highest average number of searches.

How do you measure the length of dick? Presumably affected by the COVID-19, the number of searches spiked in the first half of 2020, with nearly 200,000 searches for the year.

According to a new study, more and more Australians are using their lunchtime to have sex while working from home.

An analysis of more than 1,000 Australian households by bedroom furniture brand leader Koala found that 20% of people make the most of this time while working from home. Between the ages of 34 and 44, a third admitted to taking the opportunity to spend time with their significant other.

Darrie McLeod, who is general manager of retail operations at Australian lingerie retailer Honey Birdette, reveals that online sales of wedding lingerie increased dramatically after Victoria's latest embargo was confirmed in late May. "We have a bridal lingerie with matching garters and sales are going crazy online." Sex and relationships coach Rachael White believes many people are having increased sex during Melbourne's city closure in response to the unprecedented fourth blockade.
"Some people may have more time now."
"This can reduce stress, which may help with more focus when getting back into work mode."
"Having a healthy sex life also increases intimacy."

Another Yellow Octopus survey last year showed that 33.9 percent of men and 11.3 percent of women admitted to watching pornography while working from home.
Do these numbers blow your mind? We will continue to follow the industry news, welcome to follow.